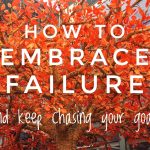 Failure is a learned behavior. If we are told over and over we cannot do something, that we are incapable, then we begin to believe it. Even if we were once very capable and successful at something. Society and our mind can beat us down and we can lose hope, so we give up. We even continue to believe we will fail even if the possibility to achieve said thing is standing right in front of our eyes. Take this story for example.

See here how failure is a learned behavior by the shark. He gave up, yet at some point, if he had tried again, he would have succeeded.

As babies and toddlers, we fail hundreds, possibly thousands of times a day. How many times does a baby fail to stand before actually doing so? How many times will a baby say mm, ma, or some other sound before saying mum or mumma? Think for a moment about the continuous encouragement that baby receives despite FAILING over and over! We would never even consider a baby’s inability to walk a failure, but rather PROGRESS. A natural progression of life. Why should this notion change as adults? Why is failure seen as something bad?

Failure is Success in Progress

It seems to me that there is hopelessness assosciated with the word FAIL. There is a negative connotation surrounding this word that I think we need to access and reprogram. We need to adjust the way we think about failure.

Albert Einstein famously said, Failure is success in progress. No success ever came about without some degree of failure. The greater the failure, the bigger the success we are trying to achieve. It is ALL progress. Some (likely all) of the most famous and influential people we know, failed multiple times to get where they are. Walt Disney was fired for not being creative. The Beatles were told they had no future in show business. Michael Jordan was cut from his high school basketball team. Everyone has their ‘success’ story, which undoubtedly is filled with multiple fails. They suceeded, simply because they did not give up.

Returning to the shark fable I began with, and the notion that failure and giving up is a learned behaviour. Over time, we all are victims of being told we are incapable, or just thinking these thoughts ourselves. We are victims of our mind. If we fail after a few tries, then we often give up. We assume that either we cannot do that, or it’s impossible or we are simply not good enough. If we tell ourselves this enough, we will truly believe it to our core.

Often we give up when we are SO CLOSE to achieving a desired goal. We are TEMPORARILY defeated, just like the glass partition in the fish tank temporarily defeated the shark. Just because you cannot do something in your life right this very minute that you were successful at previously, does not mean you are incapable for the rest of your LIFE. Circumstances, people, life, thoughts, EVERYTHING is changing all the time. If you could achieve something once, you most certainly can again.

There is another famous story entitled ‘Three Feet From Gold” that tells the story of R. U. Darby, a man in the gold rush days who was mining for gold and struck big, amassing a small fortune. However, he got himself in serious debt to do so, assuming the gold ‘vein’ would be endless. Soon enough, the ‘vein’ ran out, so R. U. Darby gave up and sold his mine to cover his debts and walked away a broken man. A junk yard man bought the mine for a small cost from Darby, educated himself on mining Gold and found that the gold ‘vein’ continued only THREE FEET from where R. U. Darby had given up. Darby had been SO CLOSE! He just didn’t understand how gold ‘veins’ worked.

Perhaps next time we feel defeated after yet another failure, it’s time to revise our strategy. To make a new plan, maybe educate ourselves just like the junk yard man did and continue mining until we strike gold. Imagine one day learning that you had been SO CLOSE to acquiring your dream, but you gave up? Allow your failures to teach you, embrace each failure as a lesson and be grateful for the opportunity to learn.

A baby does not know it is failing over and over, this is not a negative debilitating thing. Society may tell you that you’re failing in your adult life, but take CONTROL of your mind. QUESTION YOUR MIND and realise this is NOT the truth, anything is possible! Learn the hard lessons, realise that failure is a very natural part of life and without making these mistakes, we as humanity would not be where we are today. Use each lesson to your advantage and continue to strive with purpose towards your goal.

Failure is a Good Thing

Do not allow a temporary defeat to break you, do not give up. Realise there is always a solution, failure is a GOOD thing.

Remember, everyone fails and makes mistakes. You are not alone on this journey, we are all trying to succeed at something and just like we encourage a baby to stand, walk and talk, we must encourage each others dreams and aspirations.

Learn the hard lesson, failure can hurt and be a struggle, but get up and try again. I invite you to continue failing again and again, be grateful for the journey and lessons, as you make incredible progress towards your dreams!

Please feel free to leave any comments or questions in the comment section below. I would love to hear any failure and success stories of your own. Also, if you like what you have read, be sure to subscribe and connect with us on social media.

What to Eat to Stay Youthful and Energetic

What a treat it was to teach this lovely group thi

Just do it! Often we don’t realize that we are f

Superfood Friday!🦸‍♀️⁣ ⁣ This week we

Stress is something everyone can all relate to🤯

This website uses cookies to improve your experience while you navigate through the website. Out of these, the cookies that are categorized as necessary are stored on your browser as they are essential for the working of basic functionalities of the website. We also use third-party cookies that help us analyze and understand how you use this website. These cookies will be stored in your browser only with your consent. You also have the option to opt-out of these cookies. But opting out of some of these cookies may affect your browsing experience.
Necessary Always Enabled

Any cookies that may not be particularly necessary for the website to function and is used specifically to collect user personal data via analytics, ads, other embedded contents are termed as non-necessary cookies. It is mandatory to procure user consent prior to running these cookies on your website.