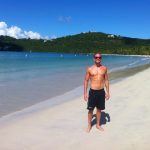 It was one Wednesday in October 2014. I had disembarked what was the third largest cruise ship in the world.

St Thomas is one of my favourite Caribbean islands and on this particular day I was heading out with a goal of running to Magens Bay (A beautiful heart-shaped beach). I set off running in my green Nike trainers, $20 and a little pot of Vaseline in my pocket.

I did not know the exact route but I had been to the beach before and I knew it was approximately 8 kilometres. The initial part was fun, weaving traffic and ducking down the streets of Charlotte Amalie and around Blackbeard’s Castle. However. I soon hit the ascent! I was running from Sea level to 146m above sea level in less than 2 kilometres with the Caribbean sun bearing down on me. Nearing my VO2 Max and and having sweated off my sunscreen I made it to the peak; Drake’s Seat. From here I could see the stunning heart-shaped bay that often appears in top ten most beautiful beach lists. Time for a quick photo opportunity before starting the decent on the narrow and winding St Thomas roads towards the bay.

I arrived in the bay hot and tired but in the most wonderful state of mind. Slowly, I walked through the lush green vegetation, the palm trees setting lines of shade. I stepped out into the full mid day Sun and onto a narrow strip of sand that had perfect tones of yellow and white. The beach is one of the most famous destinations on the island so naturally there were lots of other people sharing in it’s serenity. My instinct to find the most empty part of the beach set in; an instinct instilled in me by my mother. I walked as far down the beach as I could, until the people became less and less and eventually I was alone with my thoughts.

Once I was in the quietest spot of the beach I slipped off my green Nike trainers and entered the cooling turquoise water. It was in this moment that I let go of my thoughts, stress and worry. I entered a fully present and mindful state where time did not matter as I absorbed the wonders of my surroundings.

…Now fast forward to one Wednesday in April 2017. Here I was immersed in the hustle and bustle of London living. I was managing multiple school lettings sites and my mind was full. The consistent notifications, phone calls and emails were pulling my attention in different directions and stopping my ability to focus. I was overwhelmed, stressed and not being productive.

At this moment I stopped what I was doing, put my phone on silent, packed away my laptop, and went for a walk down the River Lea. The sun was shining and the air was fresh. I intentionally took note of all things happening in the here and now. It took roughly 1.5 kilometres for my head to clear and for me to be able to think.

There is the most wonderful cafe along the River Lea; Markfield Park Cafe. Children were playing and the park smelled perfectly like Spring. I entered a fully present and mindful state, where time did not matter as I absorbed my surroundings. It was here that I bought a coffee, re-opened my laptop and ticked off my to do list one thing at a time. With a calm, intentional and present mind.

The stories above are from very different chapters in my life. Both show the importance of being intentional with your time. To reduce the distractions and notifications that divide attention and kill productivity. But, most importantly to be present.

Be mindful not to have a mind too full. Live joyfully in the present with grace and gratitude.

I am grateful for having had the opportunity to travel extensively and be in employment that allows me to manage my own time.

Originally published at https://www.joerobinson.life/mind-full-or-mindful on October 8, 2017.

If you love Joe’s guest post, be sure to check out more of his writing on Medium or connect with him on Twitter  for frequent inspiration. Joe is an integral part of Healthy mind, Healthy Body, Healthy Life. You will be hearing much more from him!

Quotes to Improve your Mindset

Stressed? How to Neutralize it

What a treat it was to teach this lovely group thi

Just do it! Often we don’t realize that we are f

Superfood Friday!🦸‍♀️⁣ ⁣ This week we

Stress is something everyone can all relate to🤯

This website uses cookies to improve your experience while you navigate through the website. Out of these, the cookies that are categorized as necessary are stored on your browser as they are essential for the working of basic functionalities of the website. We also use third-party cookies that help us analyze and understand how you use this website. These cookies will be stored in your browser only with your consent. You also have the option to opt-out of these cookies. But opting out of some of these cookies may affect your browsing experience.
Necessary Always Enabled

Any cookies that may not be particularly necessary for the website to function and is used specifically to collect user personal data via analytics, ads, other embedded contents are termed as non-necessary cookies. It is mandatory to procure user consent prior to running these cookies on your website.